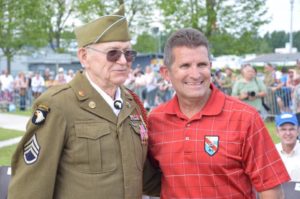 Peter Plank is one of the founding members of the Liberty Jump Team and is acting Veterans Affairs Officer. He and his wife Linda have been escorting WWII veterans back to the battlefields of Europe every year since the team formed in 2006. Peter, his father, grandfather and 5 of his uncles all served in the military dating back to World War I.