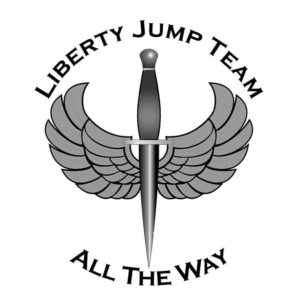 The founding members had a vision, to have a team of commemorative jumpers, who would honor not only the brave men and women of World War II, but veterans of all conflicts, by performing military static line parachute operations.  Liberty Jump Team wanted to be a team that could professionally jump into the most difficult of drop zones with accuracy and safety.

Liberty Jump Team conducts an annual airborne school to teach new jumpers the skills and accuracy needed to jump safely, and conduct a refresher course for active-duty or retired military members that have not jumped in several years. Our airborne instructors are all former military airborne members who have the qualifications and professionalism to safely instruct the attendees. All parachutists  must complete a rigorous and physically demanding school as well as a minimum number of qualifying jumps to be able to perform with the team.  After successful completion of the course, moving forward and actively jumping with the team requires the individual to provide their own equipment.

We also offer a Drop Zone Safety Officer (DZSO) course to qualify our drop zone crews, using the U.S. military drop zone safety course as our model. All of these training programs help make Liberty Jump Team an organization that holds safety as its priority.

The team utilizes vintage C-47 aircraft to perform its operations. Most of these were used overseas during World War II to carry U.S. paratroopers to the D-Day landings. Although most of the members dress in WWII uniforms, members have the option to wear their own service uniforms. They jump static line, using steerable, round-canopy military parachutes.

The Liberty Jump Team has jumped into Normandy every year since 2006 and and continues this tradition to this day. We have jumped in Holland every year since 2008 and made appearances in Bastogne in 2007, 2009 and 2010. For the 65th D-Day commemoration in 2009, Liberty Jump Team, and members of the airborne school at Fort Benning, Ga., performed a night drop on Amfreville DZ ‘T’. This jump was done on the 507th PIR designated DZ ‘T’ so for the current 1st BN 507th PIR members this was a night to remember. The team is also the lead-in annually for the combined forces military jump at La Fiere Causeway DZ ”Iron Mike 2.” The team also jumps in the United States at air shows and military reunions, bringing a piece of history to life.  We just recently in August 2015 had the honor of jumping into King Drop Zone at Lawson Field, FT Benning GA, for the 75th anniversary of the Parachute test platoon.

As important it is for the members to jump and put on a good performance for the crowds, the interactions with both veterans and younger generations at various reunions and events are equally as important, as we want to ensure everyone has a great time. The Liberty Jump Team also sponsors WWII veterans to attend events in Europe, enabling them to visit the grounds where they fought and left a part of themselves. The veterans receive thanks from the older generations of the countries they liberated, and to them it is truly humbling. To see the veterans meet and educate the younger generation about their accomplishments and experiences during the war is amazing. The veterans also often ride along in the C-47 when the team jumps; the smiles on their faces after one of these rides are not to be forgotten as they relive their own experiences.

Liberty Jump Team also sets up static displays at events showcasing many World War II artifacts as well as artifacts from other U.S. wars. Our members enjoy sharing their knowledge about the artifacts with the general public.