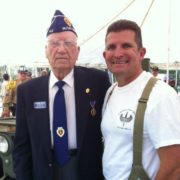 One of the founding members of the Liberty Jump Team, Peter Plank is the Director of our Veterans Affairs Program. The Veterans Affairs Program is designed to take our WWII veterans back to the battlefields of Europe, and other locations around the world.  Our Veteran Affairs Program issues special invitations to WWII veterans that are physically able to travel overseas.  We also make special arrangements for an escort if needed. We work closely with the US-Normandie Association and Veterans Back to Normandie, for host families, to house our veterans safely. These wonderful groups have become close friends over the years and they have worked tirelessly to make sure our WWII veterans are well taken care of during their visit. Through the efforts of many sponsors that contribute to this program, we have successfully escorted dozens of veterans, and their families, back to these European countries at no cost to the veteran.

The experience of being with these veterans as they go back to the battlefields is unforgettable! We have seen lives changed as these men and women travel back to the towns and villages they liberated. There have been many stories such as: 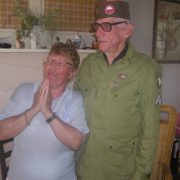 Harry Hoots parachuted into Normandy France on June 6, 1944 as a member of the 377th Parachute Field Artillery battalion of the 101st Airborne Division. His hands were badly injured by a German grenade and he then hid out in a barn and was treated by a French girl and her brothers in the village of Quettehou. We had the pleasure of escorting Harry back to France for the 60th anniversary of the D-Day invasion. It was in the village of Quettehou that we came upon an elderly French woman with ‘Hoots’ name printed on a piece of cardboard. This elderly woman was the young girl in the war that treated Harry’s wounds and she was looking for him, thinking that he might return for this special anniversary……..what a reunion this was when she saw Harry for the first time since 1944.  The above photo is of her and Harry after meeting again. The ‘Hoots’ name had been part of WWII folklore in the village Quettehou for decades. People there had wondered what had happened to the injured paratrooper they knew only as Hoots, who had stumbled onto a farm after a battle with German troops. 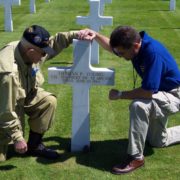 Jake McNiece and his wife Martha traveled with me on several trips back to Normandie and Belgium. He was one of the original Filthy Thirteen of whom the movie Dirty Dozen was made. Jake and his unit have a monument in Brevands, France that honor their legacy. 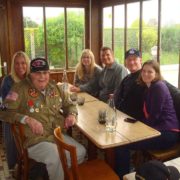 Earl Geoffrion returned to France to visit the villages that his unit fought through and liberated. He met an elderly man at one of the villages who was a little boy during the war and remembered him. He had brought bread and apples out to soldiers while they were resting in the village. We also reunited Earl with one of his best friends that is buried at the American Cemetery at Omaha Beach. 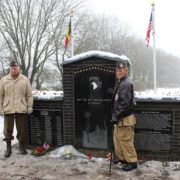 Gene Gilbreath returned with us to the village of Noville, Belgium where he was wounded by a German sniper shooting from the top of the church tower. With the help of Belgian historians, we were able to locate the barn that he was taken by his squad after he was wounded.

So many stories have come about from these heroes returning to the battlefields of Europe. We know that the time is quickly approaching when, due to age and health, these WWII veterans will no longer be able to make the long trip back to Europe. Until that time, this team will continue to put forth the efforts involved in escorting these men and women of the greatest generation back to France, Holland and Belgium. We will be forever grateful to our donors and to our friends in Europe who give freely and graciously to honor their liberators. 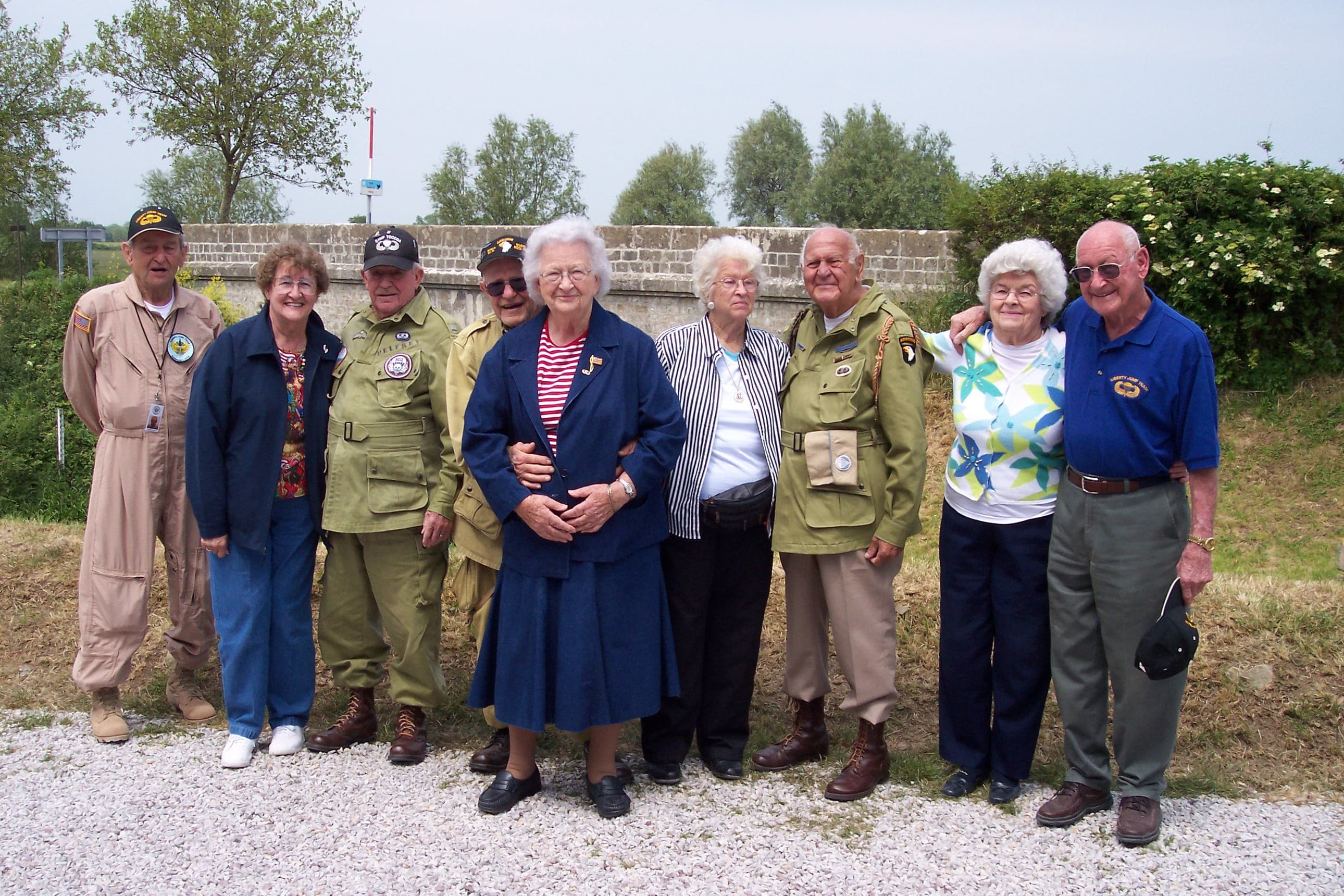 Two WWII veterans that participated in the ‘Battle of the Bulge’ returned to Belgium in December 2017 for the first time since the cold winter of 1944/45.  For Joe Glawson (9th Infantry Division) and Jim Carroll (9th Air Force), going back to the country they liberated was a trip of a lifetime.

Board Member Peter Plank and his wife Linda, escorted these heroes and their family members to the ceremonies and commemorations that are put on by the thankful and gracious Belgian people.